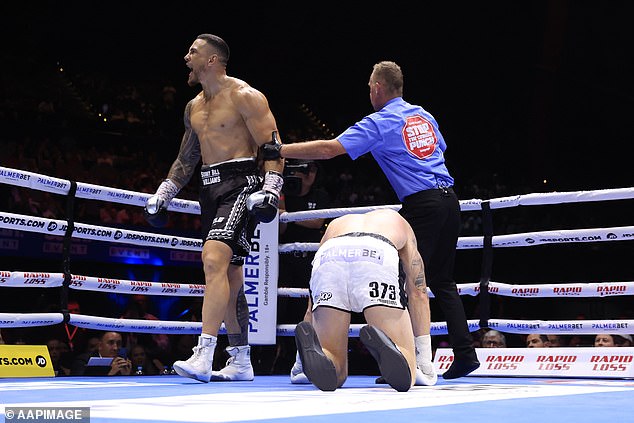 Former footy hardman Barry Hall has been ridiculed by fans for his first round capitulation against an aggressive Sonny Bill Williams.

Williams humbled Hall in the first round of their highly anticipated fight on Wednesday night, dominating from the opening seconds before knocking the former AFL star out with a devastating right hand.

Fight promos on Stan featured a tough-talking Hall dismissively saying he knew since the first time he saw Williams fight that he could beat him.

But the former St Kilda and Sydney Swans star was dropped a total of three times in just under three minutes, making a mockery Williams’ pre-bout observation that he would ‘have a real fight on my hands’.

Fans reaction to Hall’s obliteration, which has likely ended his boxing career, was almost as brutal as the bout itself.

Some even questioned whether Hall could have been killed if the fight had gone on much longer.

Sonny Bill Williams humbled Barry Hall in the first round of their highly anticipated fight, dominating from the opening seconds before knocking the former AFL star out 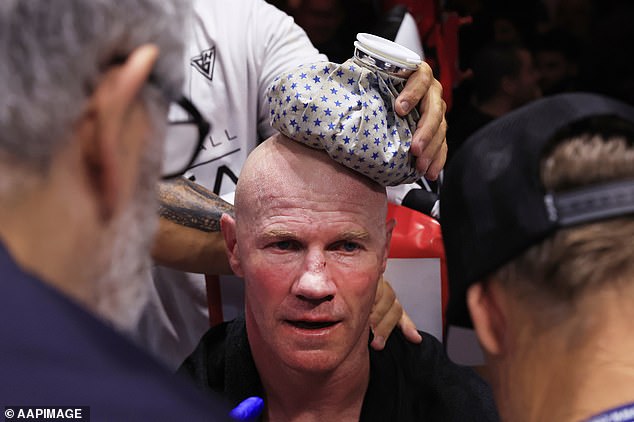 Former footy hard man Hall was brutally mocked for his first round capitulation against an irresistible Williams (pictured, Hall gets an ice pack applied to his head after Williams KO’d him)

‘I reckon I last longer in bed than Barry Hall lasted that fight,’ one fan wrote on twitter.

‘Barry Hall peaked in his boxing career 14 years too early,’ another said, referring to a famous punch he threw at West Coast rival Brent Staker as a Sydney Swan in 2008.

Hall was suspended for seven games for belting Staker with a brutal left hook and copped another game on the sideline for an attempted strike at Collingwood’s Shane Wakelin in his second game back.

Some relished in seeing Hall – a notorious hot-head known for his violent on-field outbursts – be taken out.

‘Great to see that thugs Barry Hall get knocked onto his arse. You know, like the AFL tribunal should have done,’ another added added.

While many fans of the former AFL star were left disappointed at the loss.

‘My wallet got a worse hiding than Barry Hall,’ one man, who admitted backing the loser, said. 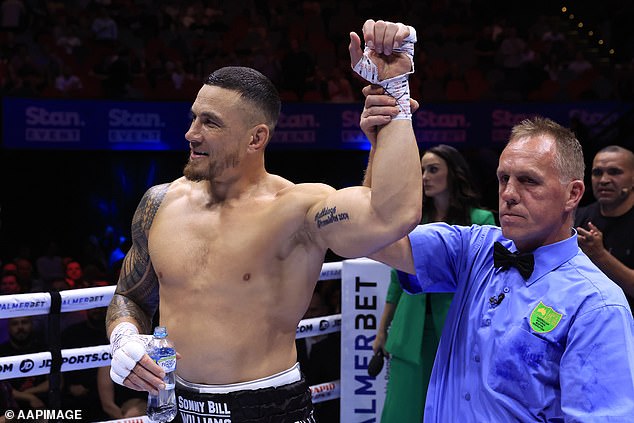 Williams, the younger man by nine years, was not to be denied and looked extremely sharp after preparing for the bout with current world heavyweight champion Tyson Fury 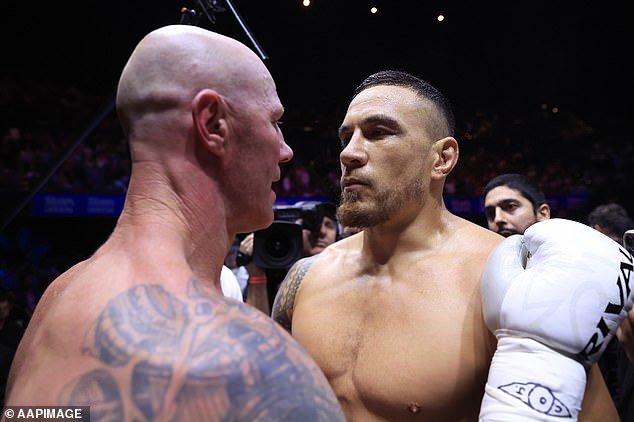 Before the fight, many pundits couldn’t split the pair during predictions, but on the night it was a walkover 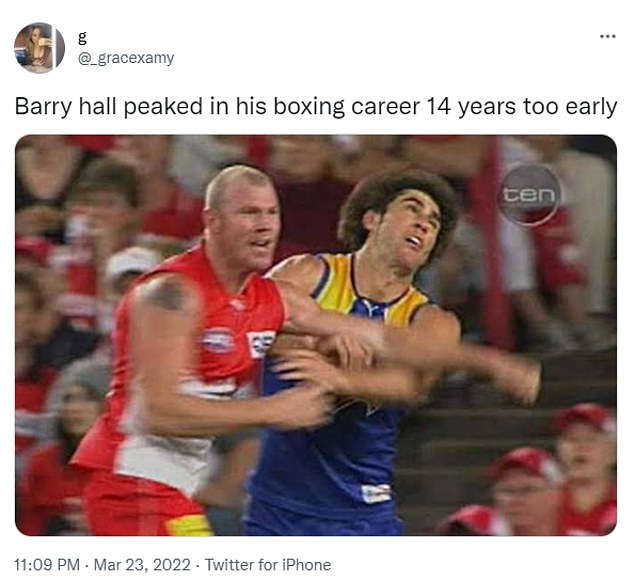 Williams landed two left hooks in the opening moments of the bout and came out by far the more aggressive fighter of the two, putting Hall on the back foot almost immediately.

Hall was knocked down inside the first minute of the fight, looked overwhelmed and couldn’t evade Williams’ powerful punches.

He was dropped to the canvas once more seconds later and didn’t respond when the referee asked if he was OK, but the fight was allowed to continue. 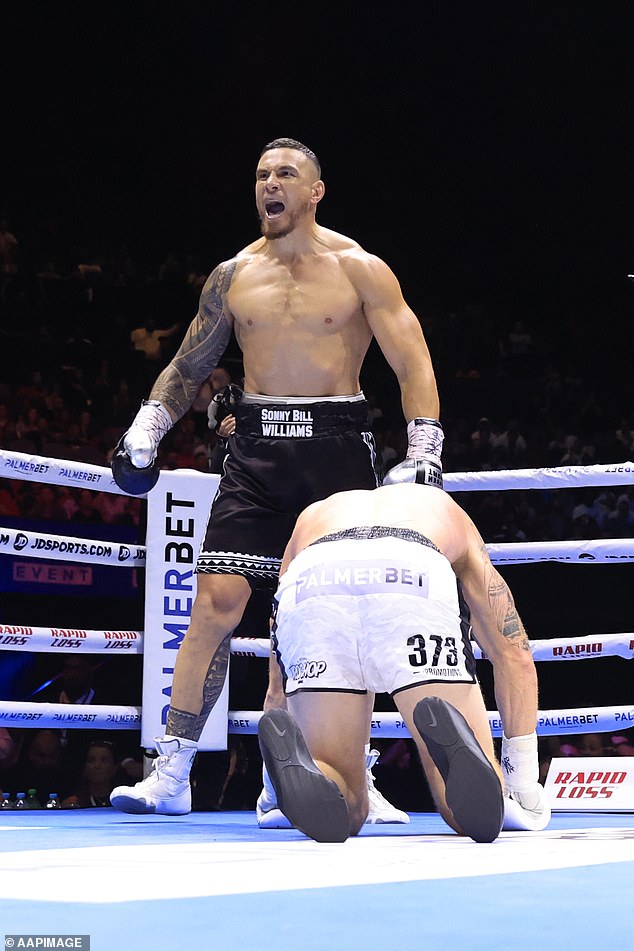 Sonny Bill Williams was a class above Barry Hall, completely dominating his opponent before putting him away in savage style in the first round 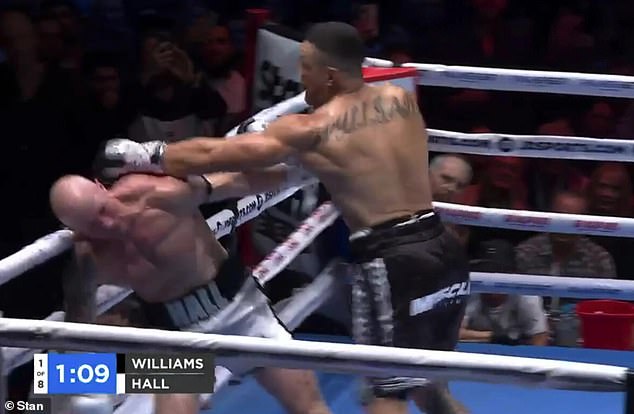 Barry Hall was never in the fight, getting knocked down within the first minute and proving an easy target for Williams’ powerful left hooks and deadly right hand 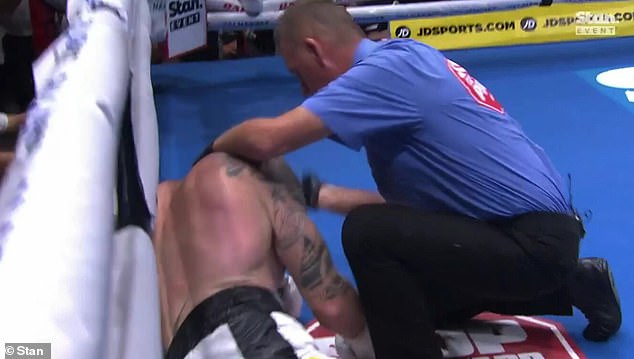 Hall was soon left dazed by a straight right hand and he was easy pickings for SBW’s final shot, which boomed off ‘Big Bad’ Barry’s chin and saw the ref rush in to stop the contest.

The former St Kilda and Sydney Swans star was dropped a total of three times in just under three minutes, making a mockery Williams’ pre-bout observation that he would ‘have a real fight on my hands’.

‘When you catch someone early like that and put the pressure on, it’s very hard to recover.’ 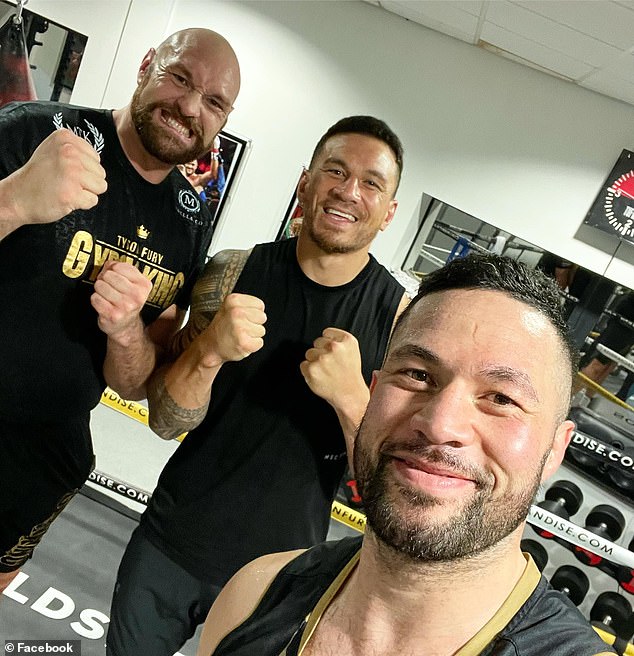 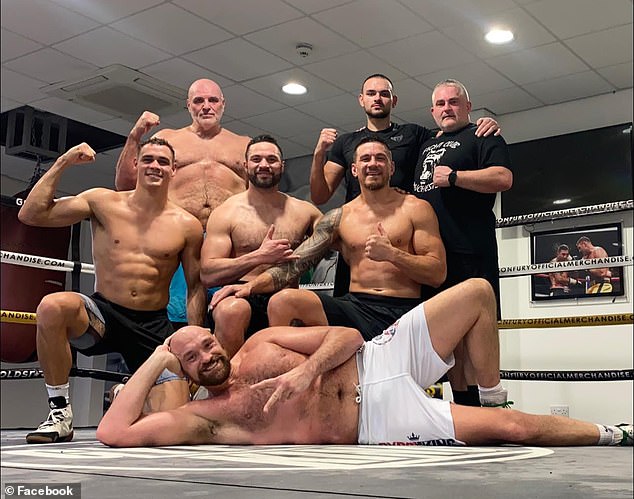 ‘Barry got caught cold. Full credit to Williams. He didn’t miss when he was doing the finishing. He did it with precision.’

Williams prepared for the fight in the United Kingdom, training with undisputed heavyweight world champion Tyson Fury and another top-10 heavyweight in Fury’s camp, Joseph Parker.

He trained with Fury’s notoriously tough camp right through January. 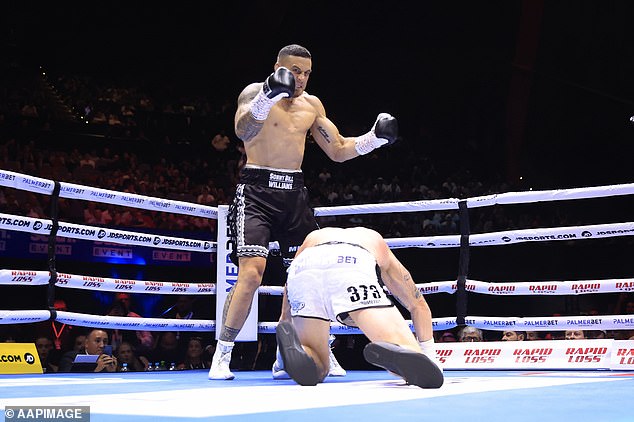 Williams improved his professional record to nine wins, with four by knockout, and no losses. After the fight he said he could face former NRL enforcer Paul Gallen next 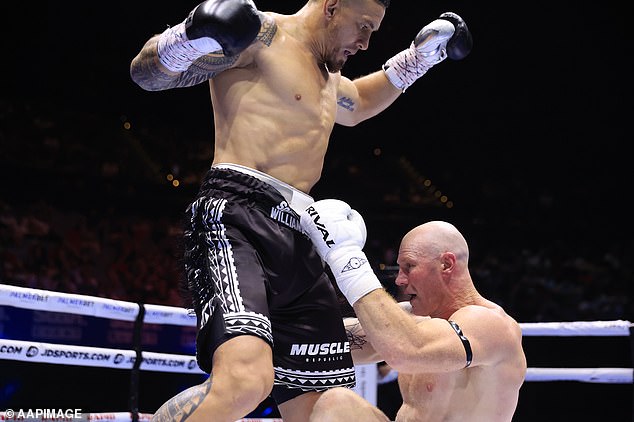 The former AFL star was dropped three times and was completely overwhelmed by Williams, who was by far the sharper of the pair and used his 10kg weight advantage to chilling effect

Prior to the contest, Hall said he was aiming to fight NRL enforcer turned heavyweight boxer Paul Gallen after defeating Williams, but his beating at Sydney’s Exhibition Centre put paid to those plans and he’d be a long shot to fight again.

‘Much respect to Barry for coming here and doing this,’ a gracious Williams said after the fight.

Asked what his future in the ring holds, the Kiwi said, ‘There’s talk of [Paul] Gallen, so maybe Gallen.’

Williams was then seen in a friendly conversation with Gallen shortly after he exited the ring.

It’s been more than 10 years since Gallen first called Williams out, and if the bout comes off, it’ll be one of Australian boxing’s biggest fights.

But based on recent form, it looks a big ask for the former Sharks legend, as social media followers noted.

The easy victory takes the former All Black and NRL star’s professional record to nine wins with three of those by way of knockout, and no losses.

He came in about 10kg heavier than Hall, and used his obvious size and strength advantage to devastating effect. 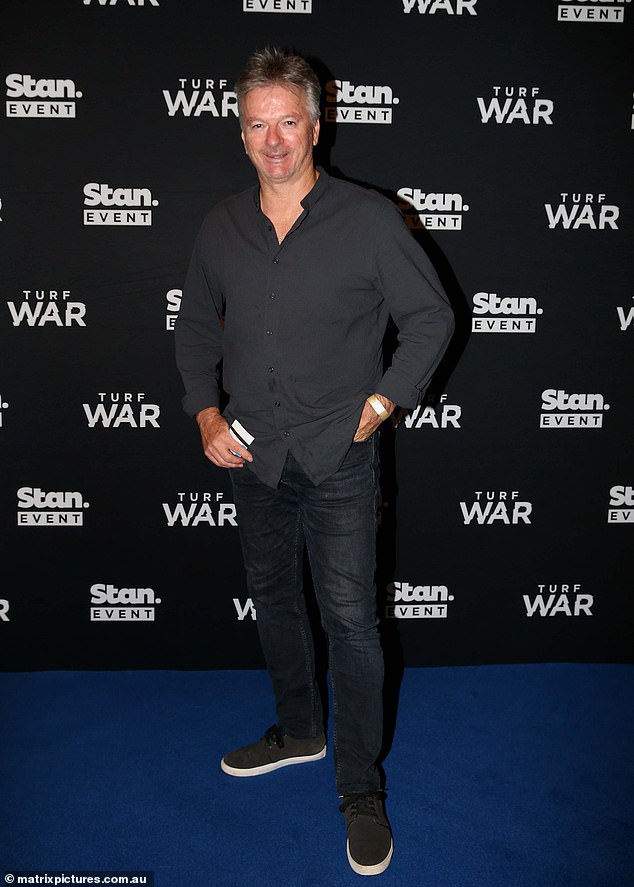 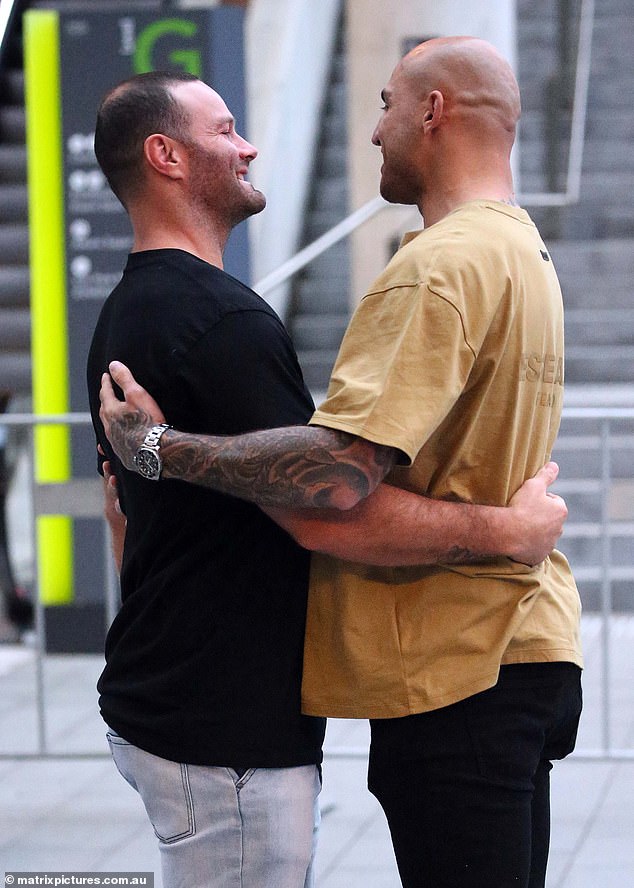 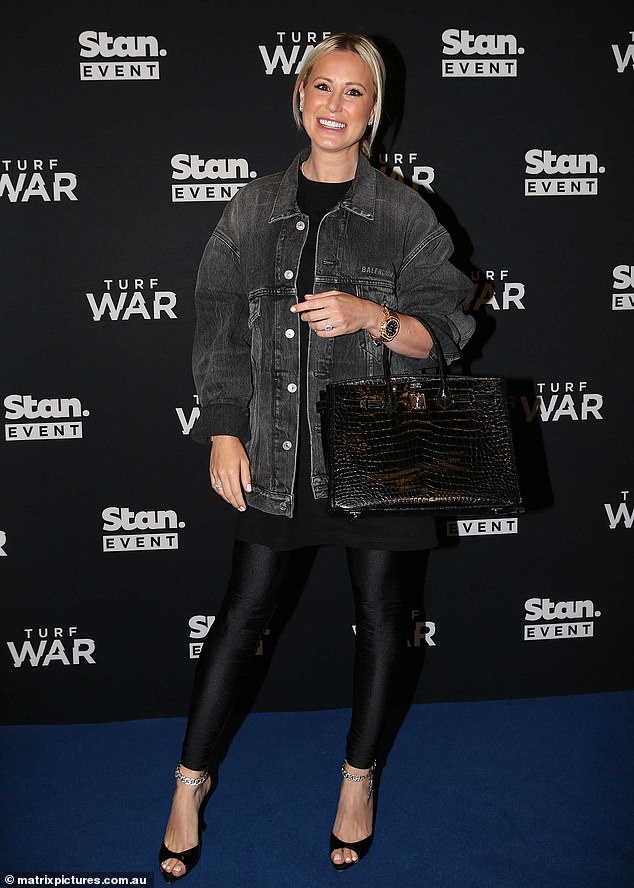 PR queen Roxy Jacenko was one of several celebrities and Sydney identities at the fight, and was joined by TV host Renee Bargh 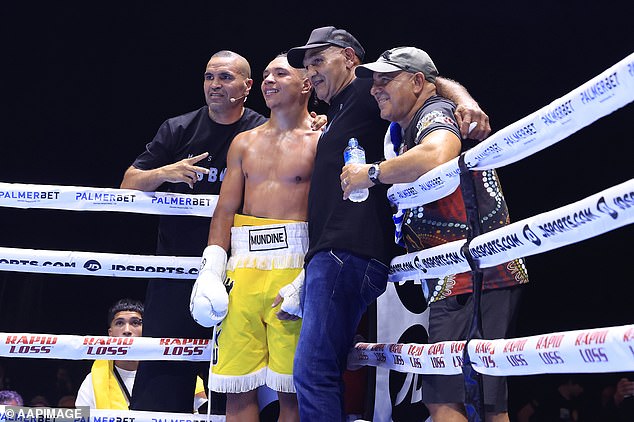 The undercard featured footballer-turned-boxer Anthony Mundine’s son Rahim in his first bout – amateur or professional – in which he showed great skill and composure for a rookie to beat Fijian pug Lepani Levatia on points.

The younger Mundine had his father and his grandfather Tony, a legend of Australian boxing who once held the Australian middleweight, cruiserweight and heavyweight titles, in his corner.

Jackson addressed the First Amendment in a Supreme Court hearing